I imagine you've already seen some hullabulloo about the changes in 4.2 to mastery. Buffs, yes. Changes, yes. But enough changes to warrant a dramatic playstyle and gearing change for Firelands?

I read the Holy Paladin: Mastery thread over on the Blizzard forums and thought to myself that going Zaroua's route was probably a great idea for 25 HM raiders. But, I'm not a HM raider, not yet. We're shooting to get normal modes down for Firelands but it didn't happen in T11 and quite frankly we had enough on our metaphorical guild plate without them. So I did think, when I read through this, that it didn't apply to me.

Then I saw that Rohan had joined the Mastery Club. Again, HM raider.

And then Adgamorix threw in his vote and I realized something: tank deaths on Shannox were wiping us. Back-to-back Arcing Slashes and melee attacks in .12 seconds were dealing 120k and 95k damage faster than my UI could display it. And if this build is supposedly very good for crazy ass spikey tank damage like this, then why wasn't I at least willing to give it a try?

I spent some justice points and got 4 pc set bonus (not so much for the bonus, but the two pieces with mastery were the best deal for the JP I had). I reforged and regemmed (all my Reckless became Artful), and picked up the pieces of gear with Mastery from the Firelands Rep Guys (vote: pathetic or not pathetic that I don't even know the faction I'm grinding for right now?).

I cobbled together a 23% bubble with hardly any effort. Previously, I had 77 mastery (so basically a 12% bubble).

And so after almost 50 attempts at Shannox over the last few weeks, we went in last night and killed him the second time. Our RL takes full credit for the first wipe, but the second pull was beautiful, pitch-perfect, and the loot flowed.

My meters were borked. According to Skada, my bubbles were... 44k. Which is actually the bubble I had on the MT when we pulled (which is crazy). I was disheartened, but I had several healers whisper me saying they felt the difference, that whatever I had done was a good thing.

Fortunately, WoL has the story. But I'm going to drag this out and first talk about my healing before, since I think that's important. Here's a picture of last night, a very-close Shannox attempt. My assignment is the same for both: Luxinterior, Shannox tank. He, I believe, made some minor to his gear over the weekend but I'm fairly certain the only change between last night and tonight was me.

Before, my haste-stacking paladin self: 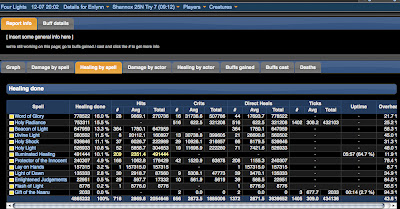 Lots of Word of Glory, and lots of Divine Light spammed on my Beacon target (Lux) to generate Holy Power. Holy Radiance popped just about every Magma Burst, and I made a point to be inside the raid when it happened to maximize my AoE healing.

And now, with Mastery: 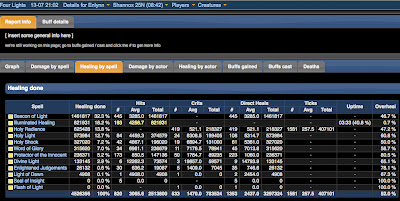 I made radical changes to my healing style. Beacon of Light jumped to my highest healing done because I set it on the other tank and basically forgot it for the fight. But check out my bubbling- a solid fifth of my healing done.

But did you catch the overheal on my direct heals? Oi.

A thought on Holy Radiance: Because my goal for this fight was to spam Holy Light on the tank the entire fight whether or not he needed it, I spent less time positioning myself to help with AoE. The numbers here are deceiving, because not only did I get less in-range ticks with this change and those ticks healed for less, but I was off by myself or sometimes just in the melee. I used Holy Radiance 10 times for both samples, but the data can't be compared because I behaved differently.

I might have lost a tick with the haste I lost, but I didn't lose any intellect so in theory each tick would have healed the same if I had played the same.

Judging on cooldown, plea and trinkets early and often, hitting AoE heal button every XX seconds in response to AoE pulses. Tank healing like it's going out of style.

I healed for a bit less overall with a mastery build, however, my ranking within my raid didn't change. The healing done page looked fairly similar for both in terms of what other healers were doing.

Everything else! Who I healed and what spells I used. I went from favoring Divine Light to being afraid of it. I lost several hundred spirit to make this change, pigeon-holing me into favoring Holy Light and using DL and Flash of Light for oh-shit moments (even that oh-shit moment that I used an instant-cast FoL while running ended up being 100% overheal because others beat me to it). Beacon became a fire-and-forget buff on the other side of the raid instead of an active tool to help me raid heal and generate Holy Power while keeping my assignment up.

(BTW, raise your hand if you forgot Infusion procs insta-cast FoLs again! Cause I sure did till last night).

Beacon probably deserves its own post since I find I'm using mine differently than other paladins in the raid. But before I derail entirely, I had to mention the Beacon change because it did change how I healed the tank. When Beacon isn't on my assignment, I am restricted. With a mastery build, I am further restricted to healing my target. Raid healing with this setup doesn't heal my target, and those raid bubbles aren't likely to get absorbed in a fight like Shannox. Also, time spent not healing the tank is time not spent building up bubbles. So this build really, really pigeon-holes a paladin into one thing and one thing only: spamming Holy Light on the tank whether or not he needs it.

Pardon me. I could have sworn I just heard a skeleton screaming "Bone Storm!" from across a chamber of ice.

This build is effective for crazy tank damage fights. I can not deny it. For 25 raiders and both 10 and 25 HM raiders, I can see why stacking mastery would be a benefit to the raid for specific fights.

After Shannox, we went and did a few attempts on our next boss target, Lord Ryolith, and holy cow had we not gotten Shannox down I would have felt useless for Ryolith. Heavy raid damage fights are not not friendly to the mastery build. (However, after comparing myself to the other holy paladin in my raid, I could have tried a lot harder so the verdict is most certainly not out yet for how best a mastery build paladin can use her abilities in this kind of fight. I'll post more once I figure it out.)

Should you go mastery? If and only if you play with a regular group of folks so you can be a designated main tank healer and work with the rest of your raid to help you get the most effectiveness out of this playstyle. I'm not so sure that 10 regular modes require a stacking setup, either, my experiences with 10s isn't near as great as 25s, but I just don't see the tank damage as crazy enough to warrant it. 10's, to me, seem to encourage staying general (ie, flexible) instead of going specialized, and with 10 mans that loss of spirit to focus on mastery is going to hurt.

But in 25s (even regular), volunteering to be that paladin might not be such a bad idea, especially if your group is solid enough that it's just assumed you're going to be one of the main tank healers. Does your 25-raid need 2? I have no idea. I'm not going to recommend that the other healadins in my raid make the switch.

If my snark earlier was not obvious enough, spamming a heal on a person whether they need it or not... is not FUN. I have squirmy feelings about casting with no regards to overheal. I half-wonder if we're going to see nerfs since the mastery build encourages spam-casting that goes against design intent.

Did I mention it's not fun? Sure, it felt real good to get the boss down but being a Holy-Light-Metronome (too bad paladins can't be Gnomes, har har!) will get real old, real fast. I mean, I'll do it, I like getting bosses down just like any other gal, but I lost a lot of flexibility to gain tank healing stability. Especially since I got feedback from the other healers saying it made their jobs less stressful. For me, sticking with a mastery build will be taking one for the team.

And a HM raider will have different experiences, since they will have a lot less overheal.

TLDR, for real this time

If you're struggling with keeping up tank damage that, by the logs, looks impossible to heal, going with a mastery build might be the ticket to downing those bosses.

But I would say, if you don't heal with a steady raid group, if your raid roster is constantly changing and your focus within the raid is different every night, then a more balanced approach might be better. And if you value your flexibility within your raid group, then you probably will not enjoy this specialist build.
Posted by enlynn at 9:11 AM