How many lights are there? Huh? Huh?!

This expansion has been tricky. We suffered from a lot of the same problems that most other 25 man guilds did, getting spots filled.

And as frustrating as it is to bring in a member who doesn't raid to be our 25th for a progression fight, I still appreciate the above-and-beyond that many of our raiders put in to get the job done.

I'm damn proud of the healing team. We have come a long way.

25 man raiding isn't dead. Dying slowly? Perhaps. But not dead. We've gotten a handful of awesome recruits and applications are still trickling in. And our next goal is to down Nef.
Posted by enlynn at 9:45 AM No comments: Links to this post

In the past, I've ranted about changes for Holy Paladins, but for the most part I've rolled with the nerfs.

But this crusader aura thing?

I have been bummed out since I read about it.

Aura Mastery is a unique ability. Only a Holy Paladin can have this talent.

AM in conjunction with CA was a beautiful thing that made Enlynn unique, and a fun ability to use while farming.

Farming as holy is not faster than with ret. If one must kill things to get to the node, tank and dps spec paladins will win out in faster kill speeds. I still have to blow cooldowns to kill more than a couple things and not run OOM.

I liked having CA for travel during raids. Being the fastest player in the raid had it's advantages, we can start summoning sooner. Especially in Cataclysm, where you can end up hitting three places in one night.

I'm going to miss it.
Posted by enlynn at 7:43 PM No comments: Links to this post

My guild is working on Cho'gall.

On our last attempt (for we are the masters of the Last Attempt), we lasted long enough to wipe to the enrage timer.

Now we just get our DPS to switch to adds a tiny bit faster and we get the loot!

The next time you hit an enrage timer, thank your healers.
Posted by enlynn at 3:46 PM 3 comments: Links to this post

Blog Azeroth asks: What is the best profession?

Oh, wait, I'm supposed to describe why I feel that way, aren't I?

It gives you BLING.

It gives you SHINY GEMS to put in your exciting new upgrades.

It gives you a SWEET META to put in your helm.

It allows you to prospect all that nasty, lumpy ore into MORE SHINY GEMS that are far prettier.

It puts a rainbow in your bag!

How can you not smile every time you see this multi-colored display of wealth, prosperity, and stat bonuses?
Posted by enlynn at 11:09 AM No comments: Links to this post

Look, I understand that hosting your own television show makes you a busy man, Mr. Robby Flay. 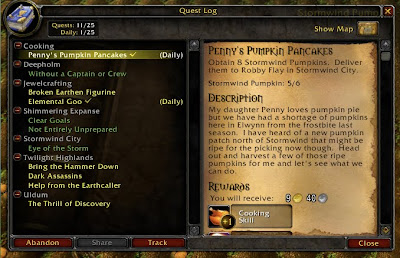 But... First. If a girl loves pie, why are you making her pancakes?

Not the same thing!

And if it takes 8 pumpkins to make a pie, why do you only accept 6... for pancakes?

Even 6 pumpkins is a helluva lot for ONE pie. Or are we still talking about these pancakes?

Huh?! I have a right to dailies that make sense.

This reminds me of that episode where he put soy sauce in his Pad Thai and everyone made fun of him. Seriously, SOY SAUCE in your PAD THAI!?! No wonder you think pies and pancakes are 'close enough'.

this time, tiers ago

I just killed Chogall this week with a 10-man group.

And then, I remember... Naxxramas. The bosses in Naxx, how do they compare with the bosses of T11?

How does Chogall compare to Kel'Thuzad?

I think Chogall is more difficult. In a way, it's hard for me to guesstimate because of how late I started raiding in Wrath, having only been level 65 when the expansion hit. I learned KT when lots of other people were already doing the fight.

With Chogall, I had to learn it with the group. But, there are some nasty things that Chogall makes us do. Worshipping, both my 25 and 10 man groups had trouble with this. I admit, I'm not very good at interrupting because I normally don't need to in a raid setting.

The new Power Bar for fights like Atramedes and Chogall are an interesting new concept. In a way, it's not new, except that I have a feeling we'll be seeing this mechanic in various forms throughout the expansion.

But how does Chimaeron compare with, say, Loatheb? From the healer standpoint, they were both gimmick fights. Stand around twitching for folks about to die, spam heal once every XX seconds. Massacre is like a strange inverted healing buff. I didn't mind Loatheb, but Chimearon feels too gimmicky for me. I hardly ever use Flash of Light. I feel like Chimearon's sole reason for existence is that I have to use it this tier.

And lastly, remember dear old Sapphiron? I'm glad that so far, in Cataclysm, there have not been many dot-auras. I don't miss them, especially now that we aren't set up for them. Yet, in Atramedes, there's a very cleverly disguised dot-aura. Instead of ticking every second, it ticks once every few seconds (Modulation). Players with low sound take a little, players with high sound take a lot. I actually like this fight. If executed properly, it's pretty easy and there's still a lot going on.

We raided ICC for fun, and to get the LK down (a guildie just got his legendary, we'd only needed one more kill to get the neat quest items). It was a bit strange to be back in ICC, I kept trying to play like it was still 3.3. I really hate to QQ about how much better the old days were, but, I don't recommend letting yourself forget that Beacon only transfers half.
Posted by enlynn at 12:09 AM No comments: Links to this post

My boyfriend has the sneaking suspicion that I'm bored with WoW.

I've just been quiet, is all. On the blog, on our guild forums, at the dinner table (nerd alert! you know you're in too deep when you're discussing guild politics at the Thai restaurant!). I'm not bored, there just hasn't been anything new to talk about.

I don't think it's a bad thing.

We did cancel raids this week due to lack of signups. But our GM put out the word that we're recruiting, we did get a couple of bites, we are looking better for the future (some of our normally quite-regular folks needed to step out this week, putting a spotlight on how thin our ranks had gotten.) We're up to 9/12 N, working on Chogall. Last week we went with one less healer than usual for most of our farm kills. That was neat, and I like being the one to speak up in Mumble to remind the guild: Only you can prevent your death.

A couple of weeks ago we started a 10-man alt run in which I fell in love with holy priest. All those silly things I said about me and my bad paladin self raid-healing before? I'm sorry. I was so full of it, and I had no idea. Holy priests are RIDICULOUS WITH OPTIONS and I have such a blast on her.

I'm doing a 10 this week on my paladin since our normal raids were canceled. It's just not as fun. Holy Radiance kinda blows in the smaller group. The difference in mana is insane.

Oh, and not having heroism... not fun.

It's probably too soon for me to make broad sweeping generalizations but if I were solely focused on 10 man raiding I would be a priest this expansion. Holy has so much flexibility. I can't get used to the disparities in mana costs, either. Paladin heals are more expensive because of holy power and the expectation we'll judge on cooldown. I didn't realize how chained I was to making sure I was casting shock and judgement on cooldown.

For priests, yes, you wanna be casting Prayer of Mending on cooldown but you won't go OMFG OOM in 30 seconds if you don't. And the recent changes to chakra mean you can set and forget it. I like that idea.

Kurn has a post going where we can talk about how much we absolutely love paladin mastery (sarcasm mine).

Anyways, just a smattering of random things. No news is good news, right?
Posted by enlynn at 8:47 PM No comments: Links to this post