Our WoW raiding break extends till next week. And good thing, too, because I broke my gaming computer trying to upgrade!

Ahem. Don't let Enlynn near the hardware. I'm hoping that my wonderful guildies can help me troubleshoot.

In case you haven't noticed my lack of enthusiasm for raiding, my lack of posting, my... er. Lack in general. I'm not quitting WoW. I would like to see Deathwing die and we've got a couple more fights to learn yet. I will see my guild through to that as long as we can make it happen.

But I have to be honest with you. I don't know what things look like for me past that. And I don't want to go quietly and just let this blog fall to dust. I love this community. It's hard to even think about saying goodbye. I remember some of the wonderful WoW bloggers who have already closed their doors. I almost cried when Larisa shut down PPI. My blogroll and RSS feed are full of WoW bloggers who haven't updated since February or March.

I've gotten so many readers who leave awesome comments. Judging by my stats, I've had quite a few lurkers who've never said a word (please don't think I'm asking you to de-lurk. I feel guilty when bloggers ask for it, fiddle around with a comment before I delete it and don't de-lurk. So you're in good company). I have enjoyed this blog. It taught me a lot about myself, about gaming community, about the game. I hope you found it useful. I hope you found it funny once in a while.

And if for some reason you can't get enough of me (and you are interested in a Star Wars blog), you can find me writing at pealsheals.wordpress.com. Still talking about healing. :)

In the meantime, I'm not disappearing just yet. Here's hoping for some good raiding in the new year!
Posted by enlynn at 9:31 AM 2 comments: Links to this post

I have been avoiding this post for a while now.

For one, it's been a quiet December. With the release of the DW tier, I was at first disappointed with how "easy" the first few bosses were but after considering Blessing of King's take on normal tuning, I dare say Rohan is right. We've gotten to 5 bosses down (6 on 10). It was really nice not to be stuck on the first boss for weeks. Having only one fight to work on isn't enough to sustain us and it just plain sucks.

But the last couple of weeks, we've had trouble filling raids. Last week was expected, with holiday parties and obligations. My planned "10 batches of cookies in 30 hours" took more like 80, so our calling the raids was a relief. I ran right back to the kitchen and haven't played much at all.

I think the question in a lot of people's minds is "Will Star Wars kill WoW?" and on one hand, WoW is not dying. I don't think it is, I don't think WoW is going away.

On the other... I do think SWTOR will kill some guilds. 25s have been in a precarious position all year. You know it's bad when the premiere hardmode guilds on your server are recruiting in trade and cancelling raids. Seems to me like 10-mans are the way to go, and in MoP 25s will finally die the big death. Players who prefer the larger format will have to choose to stay or try a new game. Like Star Wars.

But... Not because SWTOR is super-great or shiny or everything that WoW isn't. None of that. Remember when I qq'd that a Crab Stole My Kill? I haven't gotten my joy back in playing WoW since then. I've still raided, but something is missing. I wonder how many others like me are feeling the same way.

The only thing I've gotten excited about is transmog. For some reason I love collecting late Classic and BC green-quality plate. Can I just say one thing? I make plate look good. 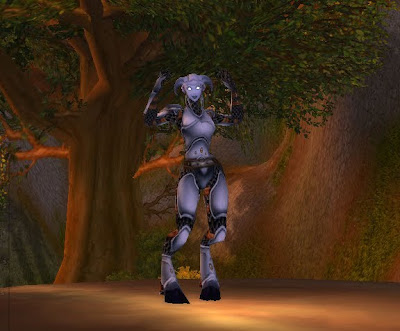 Posted by enlynn at 1:59 PM 2 comments: Links to this post