my beef with infusion

What I love about Serendipity

Procs by casting Binding Heal or Flash Heal. Combined with Surge of Light (great talent synergy!), I generally find opportunity to use Serendipity procs at least a few times a fight. And I have choices: I can either use it on a Greater Heal or a Prayer of Healing. And if that wasn't choice enough, I can either spend 1 stack or wait and cast at 2 stacks!

But it gets better. Priest healing spells are so diverse that I can hold my Serendipity charges, casting a ton of other heals: Prayer of Mending, Circle of Healing, Renew, Heal, Sanctuary, PW: Shield, etc. I can save my Serendipity stacks if I know a big thing is coming up: a pulse AoE where I'll need to heal the raid, or a big tank heal for a tank swap or timed ability.

Why Infusion Sucks, In Comparison

Infusion procs by Holy Shock crit so it's a chance instead of a guaranteed proc. I'm cool with that. An Infusion procced with a non crit, every 6 seconds would be ridiculously overpowered. So how it procs isn't a problem IMHO.

The problem is how we spend it. See that list of stuff up there, stuff I can do as a priest while saving my Serendipity stack for something I know is coming up? Here's the list for what paladins can do that heals that won't eat my IoL buff: Holy Radiance. Oh, I might be able to spend Holy Power, if I have three stacks.

So, we have one--maybe two--spell choice(s) we may or may not even want to use before our IoL proc gets eaten up by our next cast. There's no choice here. I cast Holy Shock (and half the time I'm already casting my next heal before my UI even registers I've gotten IoL), my next heal is short. Whether or not I need it that fast. Whether or not I want to use it right away, it gets spent. The only way I can save it is to stop casting, which I think we can all agree is a terrible idea.

Did I mention that a holy priest, after choosing to hold her Serendipity proc a few seconds, can also choose to use it on either a group heal or a single-target heal? Paladins get... a single target heal.

I don't think I have the answers. I'm not suggesting that IoL should be more limited in how we can spend the proc because that would just make the spell clunky. And Serendipity is arguably a minor part of priest healing, while Infusion of Light is a major component of paladin healing (though I could argue that it's only major because paladin spells are so limited).

Managing daybreak procs and Infusion is also a bit clunky. Using Daybreak to Holy Shock back-to-back can waste an Infusion proc if you double-crit. But critting Shock > hasted Divine Heal (.7-.8 seconds at our gear level) > Holy Shock is awkward to time. I can't chain cast it near as fast as I should. It breaks my casting rhythm (though I realize how personal and small of a complaint this is. My big beef is the no-choice-to-spend-or-hold argument above).

But that's why I don't like Infusion of Light. There's no choice in using it. It happens, then it gets spent almost immediately. It's a passive RNG-based HPS boost. I can't hold it to save a tank, I can't rely on it to proc when I really really want it to. And even if it does proc at a good time there was no Enlynn-saving-the-tank. It was a lucky proc, is all. Unlike Serendipity where a well-placed hasted GH could actually be smart play.

Posted by enlynn at 1:47 PM 5 comments: Links to this post

One of my guild masters is vehemently against e-readers. 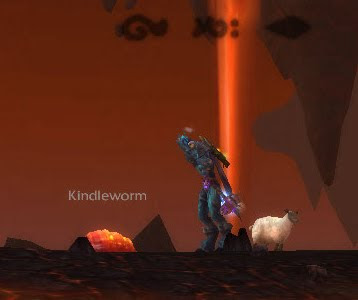 I know the issue of e-readers has polarized both reading and publishing communities, but what did this poor little creature ever do to you?

Posted by enlynn at 11:03 AM No comments: Links to this post

I wish I were something else

Class envy happens quite a bit.

I'm actually quite happy to be a paladin right now. And yes, I am sober. Though I do wish we had a couple more AoE healing options (or rather, that Holy Radiance was a choice instead of a fire-and-forget, perhaps?), we're in a good place. I still miss having a raid-wide bubble (Divine Guardian), and I sure as hell miss Divine Intervention.

It makes me wonder, though, if I had less experience on my other characters if I would feel the same way.

Because I feel like I field a whole lot of "I'm not this" complaints lately. A druid vows that he's rolling a paladin because he's tired of tank healing with hots (tank-healing assignments are by player, not by class, my usual tank healers are AFK to RL lately). A shaman complains that he doesn't have group heals if people aren't stacked up (hello, ALL healing classes suffer from this). If only I had this spell. If only this spell did this effect instead of this. If only my iconic signature healing spell was actually as good as everyone says it is.

I know the truth: it's all close enough. Vixsin has a great write-up for the bench and the top 1% guilds and class balance therein, but I think it's safe to say that for the rest of the world, class balance is "close enough."

When I hear class complaints (from regular mode players), I always get the sense that it's the grass being greener on the other side than any real technical problems. And I'm biased, I know, having experience with all four healers makes me feel pretty confident I could be an asset to my raid no matter which I brought. (Isn't Enlynn so arrogant?!)

I think it's that time of the expansion, though. We hit brick walls on bosses, a key player we got used to having steps out for real-life issues and the void hurts. But instead of saying we miss the person, we say we miss his class mechanics. Sorry, I'm not buying. We miss the player who know to pop a cooldown at the right time. Him being a paladin, a shaman, a priest, not so much the issue. (Though the one night we raided with no priests was a bit weird. Fast forward two weeks and we have 6. Huh?)

And in retrospect, we made it through the summer only having to cancel a couple of raids. I think a few months ago the tones of a lot of my posts were on the verge of grim. We didn't know if we were filling the next raid, but somehow we pulled through. We've even had a waitlist for the past couple of weeks, and been able to let some players take the night off because they needed it without it being too painful for us. So things are looking up, even though we're still stuck on Beth. We got so close.

I hate fights like Beth'tilac not because of Phase 2 (which I'm doing better on, admittedly) because for Phase 1 I am stuck up on top so I have no sense for what the ground phase looks like. We had some (I hate to place blame here, but I saw some healers pull miracles out of their asses so...) DPS who would rather make excuses for why the adds don't go down than to just make the adds go down. But anyways. We're almost there.

Though, if you aren't paying attention to who has died and who has casted Brez, and you have no idea when the phase change is coming, you perhaps are not the best candidate to demand who brezes who. Just sayin'. Let someone who's actually using raid frames and situational awareness take care of that, hmm? Or maybe a RAID LEADER?

Oh, and our ranks are strictly attendance based, so when you take a demotion it is absolutely, positively, 100% NOT PERSONAL. Making it personal and threatening to quit gets you nowhere.

We could still stand to recruit a few more people, but I think that's standard fare in a 25-raid, there's always a bit more room. We're raiding this week, and that's great. And if the worst problems I have to deal with this week are "I wish my class had this", then that's not a bad place to be at all. :)

For fights like Beth'tilac, I wanted ToR because BoL doesn't transfer between levels. I figure if I have to Bacon the tank I'm healing anyways, may as well generate some extra holy power? And I wanted to have Pursuit of Justice, because, well, I like being fast. Perhaps it's not entirely optimal, but for the fights where I'm using BoL for Holy Power, I figure I may as well not bother with Eternal Glory. In theory, I'll be using Light of Dawn a whole lot. (My glyphs reflect these choices, too, one for each spec).

I don't know what I would do, if I only had one spec to choose to be a healadin. I feel tugged in two directions, with mastery demanding one play style and haste another. Each has it's own build and strengths and weaknesses, and every encounter seems to demand something different.

We got Beth to 1% last night but ran out of time to go in for that one last attempt. I feel pretty darn useless in Phase 2, but I think that has more to do with my being a paladin than being a mastery-stacking paladin. Hit Holy Radiance on cooldown, spam the raid. Those bubbles get absorbed, at least, but without haste my direct heals are painfully slow.

I guess, even with haste, my direct heals are still painfully slow. =P

TL;DR: Paladins need a third spec so healadins can have 2 healing specs AND an offspec. Because not everyone is crazy enough to do holy/holy like me.
Posted by enlynn at 12:12 PM 5 comments: Links to this post