still in the dark: mastery buffs not enough

I promised myself I'm not going to let this go too long, so not much theorycrafting. Also, there may be QQ ahead.

I mean, it's a buff so I shouldn't complain. But here's what I think happened:

Tank healing for paladins hasn't changed. Most of our shields get overwritten before the absorb can happen. My tank absorbs for 4-19 and 4-27 are a bit different from playstyle change (more raw heals done spamming the tank on 4-27 because our other tank healer fell into the lava).

However, the mastery buffs did affect LoD absorbs. My absorbs on the raid on 4-19 were all overheal in the 50-75% range. Those numbers last night went down, or rather, the amount absorbed went up (overheal in the 30-70% range, with more bubbles being entirely absorbed).

So we're a little bit better at raid healing. A little. I don't know about you, but my raid assignments are still like they were in Wrath: pallies on tanks, the rest on raids. Sure, I pop Holy Radiance (which doesn't proc mastery) every minute when the boss does his raidwide-pulse-damage like a good healadin, but let's be honest here:

Why in the hell would I assign myself to the raid when we have shamans, druids, and priests? So I can use half-powered Light of Dawns once every 14 seconds?

QQ. I know my raw healing is often comparable to what other healers do, but I still think healadins are broken.

One spell on a 40 second cooldown does not fix "it".

The way the encounters are designed, we're tank healers who pop a raid-cooldown, then continue spamming tanks. There's really no spell selection, and if we're not clumped up...

And with the damage model in Cataclysm, we can't even tank heal by ourselves. I mean, I know that no 1 healer can, but still. I can, in theory, stop raid healing, and the raid healers would just have less overheal.

I main-changed in the second tier of Wrath, and later called it a mistake because of all the time it wastes. Switching to priest isn't an option (though a girl can dream) because we have so many priests in our raid. Right now, we could use a shaman, but our alt run already has so many shamans that gearing her up would be difficult. Oh, yeah, and she's 72. So when I talk about thinking about not being a paladin anymore, I do mean to say I've been giving this a lot of thought over a long time. Can you believe that 4.0 was six months ago? Holy paladins are still the punchline.

We already have one holy paladin in the raid. I feel at this point having 1 less paladin and 1 more anything would be better than having 2 healadins. Especially since our shaman hangs around the 50% attendance mark.

How is 4.1 treating you? How do you feel about your healadin and her contributions to the raid?
Posted by enlynn at 9:02 AM 6 comments: Links to this post

I'm so excited for the blog egg hunt tomorrow!

I've hidden an egg around bubblespec, somewhere. Good luck, and I'll see you over at Kamalia et Alia's blog!
Posted by enlynn at 10:39 PM No comments: Links to this post 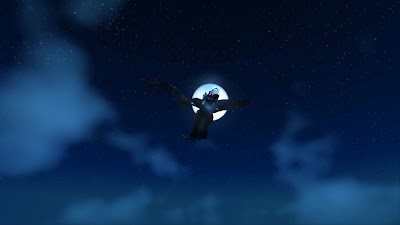 Proto-drakes are my favorite mount. And I have to say, the Ironbound is elegant.
Posted by enlynn at 11:19 PM 1 comment: Links to this post

I have a confession. I'm a binge drinker.

Okay, IRL I can't hold liquor to save my life, but in WoW, it's different.

I like carrying several kinds of alcohol in Enlynn's bags. Sometimes I go quite a while without drinking them (the good thing about booze, it doesn't really expire), but then I'll go through a stack in one night, starting every pull that night with the screen fuzzy.

Weird. I'm to finish off that stack of Rhapsody Malt I just happened to have in my bags, to celebrate.
Posted by enlynn at 3:07 PM 4 comments: Links to this post

Fact: Priests, Shamans and Druids get staffs, along with an assortment of 1-handed weapons they can use with off hands.

Fact: Paladins of the Self-Righteous variety (*cough* Holy *cough*) only get to choose between a handful of 1-handed weapons.

Totally My Opinion: Blizzard should implement 2-handed caster maces. Paladins would get another option, maces are totally sweet, it makes sense for Shamans, Druids, and Paladins to have a gigantic mace, and, seriously, I have to admit: I would love to not have a shield for just one tier.

We'd get to cross our fingers on weapon drops for more than one boss.

With 3 classes and 5 specs being able to use 2-handed maces, adding it to the loot table wouldn't clutter things up so badly.

Did I mention it would give us more options for loot?

Yes, gigantic caster maces would be amazing.
Posted by enlynn at 6:03 AM 5 comments: Links to this post

more shards for you: spellpower plate

How do you feel about holy paladins being the only spec in the game with gear devoted to it?

I'm okay with it. No, really. The alternatives are far worse, clunky if you will.

We could wear mail. True, but we could also wear tutus and prance around with wands. Can you imagine a flipping PALADIN hopping around with a wand and ballerina slippers? I'll pass, thanks.

We could wear strength plate using conversions of melee stats. Then we'd heal AND be able to throw it down like a melee. Sure, we could be redesigned like cleric in DnD who got the best of all worlds: healing, armor, and power. And then ret and holy alike would have to ride the nerf-coaster while they got us 'balanced'. And by balanced, I mean, not #1 in PvP.

Pass. I'd rather not deal with the rogue tears.

Another problem with the strength plate idea is the gear competition. Right now, things are slated a little in favor of holy paladins. We gear up pretty quickly. Yet, lumping us in with the strength-plate crowd isn't an answer to the loot distribution problem. Warriors, Death Knights, and Paladins are popular classes. Melee DPS is a popular role. At least in my raid, the competition is still pretty fierce for strength plate.

It's anecdotal, but I noticed last night that I'm one of the weakest-geared healers in my raid.

Spellpower plate gets sharded in droves, it's true! But regular raid groups are sharding lots of stuff off the first few bosses. We're sharding the spellpower legs off of Halfus not because spellpower plate shouldn't be in the game, but because we've been sharding every. single. drop. from Halfus for weeks now.

(Three BoEs dropped last night before Chogall trash, 2 agility trinkets and the healer staff. No one seems to be complaining about all the extras of these we don't need...)

The other huge problem I see with a strength-plate conversion is how differently things are itemized across strength classes. Different classes want different things, and that's a good thing. But if holy paladins had a conversion, it would be tricky as hell to figure out what we wanted. (Other than to avoid expertise like the plague if it was converted to mastery!). And then Rohan over at Blessing of Kings brings up an very good point: if we have a conversion for plate, what about non-plate stuff? Do we roll jewelry like healers, or like plate dps? We'd be Ninja Raiders!

I've heard the argument that spellpower plate is wasteful . Okay, IRL I'm all for being green and reusing bags and wearing clothes till the zippers rust and turning the heat down and not wasting gas.

But this is not real. Pixels can not be wasted. We do not need to remove spellpower plate to 'conserve' gear. Waste is not a bad thing in a video game, in fact, it's good. It ensures that the content has repeat value.

I mean, if we're going to remove spellpower plate to make sure that the loot distribution is "more fair", the next step, obviously, is that the game should check the raid composition and only drop things that those classes can use. No druids or rogues in the raid? Guaranteed no leather!

Oh, wait. We still might have repeat drops. Instead, we should have the game not only spec-check, but gear-check. If all the clothies have a 359 helm, no helm would drop off that boss. That way, each boss kill guarantees only useful and necessary things that we need.

So then we need to kill each boss exactly three times before the whole raid is decked out. Then we have no reason to come back, except to push through to the bosses we haven't done three times yet. And what happens when said raid already has everything off that boss already? Does he just drop nothing?

Does that actually sound fun?

If you're raiding every week, you've probably sharded a whole bunch of gear, and only a tiny amount of that was spellpower plate. Waste and RNG in drops are an important part of raiding. We notice the spellpower plate because it sticks out more obviously, but every week we 'waste' a whole lot of gear.

I agree that spellpower plate is a bit clunky, but the alternatives are more broken than it stands currently.
Posted by enlynn at 9:32 AM 4 comments: Links to this post

for the horde, take two

When I think about it too long, I start to remember just how much I love the Horde.

If I was able to make my paladin a member of the Forsaken, I would permanently Horde.

What characters, those undead! How can you not love Galertruby?

I really miss my priest being undead. Or rather, I miss my undead priest. I left her logged out in Howling Ford, having picked up the first quest.

And how can priests be undead but not paladins? The undead paladins in Icecrown cast Unholy Light and Judgements of the Wicked. Why don't I get to do that?!

I know it's a pipe dream, but if Blizzard ever allowed Forsaken Paladins, I would totally do the transfer.
Posted by enlynn at 7:41 PM No comments: Links to this post

always late to the party

Well, I am two days too late, but I finally read the April Fools Day joke from Blizzard, linked here by MMO-Champion:

Paladin
The judgment thing is AWESOME.

Also, more sparkles!
Posted by enlynn at 6:24 PM No comments: Links to this post