I suppose if I said that I didn't like goodbyes, that'd be... well, absurd. I mean, who actually likes to say goodbye?

My time in Four Lights is over. We weren't able to put together a full 25-man raid in almost a month (though to be fair, 2 weeks of that were Christmas). While some were awfully quick to cry "Star Wars!" as the reason, to be honest, most of the converts were playing both. We showed up to raid.

As of last week, Four Lights is officially going to a 10-man team. That was my cue to step out. I've never enjoyed 10-mans on my paladin, for one, and I knew my quitting WoW was on the horizon. It happened back in September. This was not a quickly made decision. And it was definitely not easy.

This is my last bubblespec post, the last time I get to call myself Enlynn. I canceled my World of Warcraft account. They asked for my reasons; I told them the game had changed too much. That wasn't near enough information to really tell them how I felt and why I knew it was time for me to move on, but you've been a part of my WoW life long enough to have a good idea why.

So let me say thanks.

Thank you, guildies: Four Lights was a blast. I was a guild officer for a year, pretty much for Cataclysm. I loved the leadership. The members made FL a fun guild to raid with.

Thank you, World of Warcraft: WoW gave me a lot of good times. And while the developers are taking the game in a direction that I don't wish to go, I have to applaud them for taking risks and being willing to reinvent the way we play over and over. The perception of MMOs outside the community is changing for the better, thanks to the massive popularity and accessibility of WoW. Many of the successes in WoW paved the way for future MMOs. This is a good thing, even if it's no longer my thing.

Most importantly... Thank you, readers: Sharing my WoW journey has rewarded me in ways I couldn't have imagined when I started out this humble little blog back in 2009. Your comments inspired me to keep going, encouraged me, gave me advice, and made me laugh. You connected me to a fantastic community. I'm honored to have been a part of it. I'll miss you. 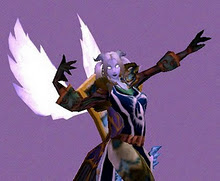